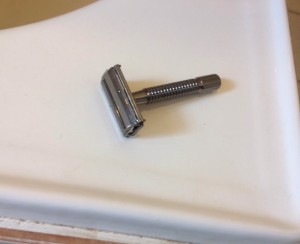 It’s about two years since I ditched the disposable razors.

When I thought about that the waste I saved  from non-disposable razors it was actually secondary. The money I have saved came to mind first. Okay lets say you go through a pack of razors a month $20-$25 per pack over the course of a year is $240- $300. Not to mention, I never have to spend the time going to the shops and getting new razors.

The waste of disposable razors is also massive – 2 billion razors are disposed of in the US per year – now think about what the rest of the world is using!

I really value having smooth skin. I usually let things go a bit more in winter, but in summer I don’t want to go “au natural” and let my hair grow – (each to their own). So when my partner was given a metal safety razor to use for his beard, I instantly stole it and gave it a try. I was worried at first since it is so much sharper than the cheap disposable blades.

We bought our blades from a barber and you get the razors their as well.

I have learnt a few things that have made it easy and enjoyable to use the metal safety razors.

1. You get a much better shave, since it gets closer to the skin, which means you actually have to shave a lot less.

2. You need to be a touch more careful with these razors than the disposable ones. So instead of a super quick shave before you rush out the door, you actually need to take more time and care and be a bit more accurate. I actually don’t mind doing this, because I do one really good shave and then can leave it for a while. I make the process a bit more of a self care ritual.

3. The way you angle the shaver makes all the difference. It takes a bit of trial and error to get it right. The big difference is that disposable razors pivot and safety razors don’t so you need to adjust the pivot by  how you hold the razor. ( A 45 degree angle works for me)

4. You really don’t need to add pressure to the blade. Let it glide over your skin to get a smoother shave.

5. The razor blades lasts for ages. Make sure you let them dry out in between shaves and open it up to clean it out after a shave.

6. My fiance and I share a razor and just switch the blades when we each use it.

A few more tips for eco-shaving…

I don’t use shaving cream, I just use a lather of a nice soap and that works a treat.

I also try (I admit to not doing this all the time) to use a bucket in the shower to shave instead of just letting the water run.

So for the sake of your wallet and the planet – ditch those disposables and never look back.